In celebration of the 75th birthday of Liza Minnelli I’d like to share a memorable moment when Mama met Minnelli. She never forgot it and talked about it often, Liza was one of Mama’s favorite singers. Proving once again the power of music and the ability to spark memory in those that otherwise seem to have lost that ability. Thank you Liza for the memory and Happy, Happy Birthday!

There are other things in your life that you never forget, like when Mama met Liza Minnelli. Meeting Liza epitomizes the New York City experience. It was a chance meeting on the street, no anticipation, just another day in the city. 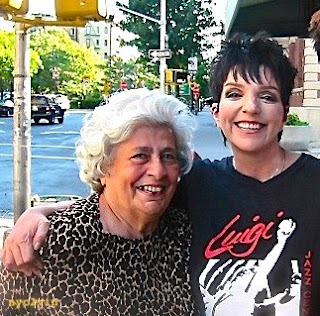 Douglass and I were walking down the street in the West Village to visit Mama at the nursing home. As we passed by an outdoor café, an extremely animated woman caught my eye and I slowed down. Could it be? No way. Is it? OMG, it’s Liza Minnelli! I said to Douglass “Slow down, listen to me, there’s Liza.” He kept walking and looked at me like I was nuts, he didn’t believe it was her. I looked at him and said “Mama is finally gonna meet Liza! Go back to the apartment and get the camera” (we didn’t have a camera phone back then). I ran across 12th Street to get Mama who was sitting on the bench outside the nursing home. I told her “Hurry, get up, come with me and walk to the corner - Mama, you’re finally gonna meet Liza Minnelli.” Well, I never saw Mama walk so fast with her walker. Douglass now had the camera and the three of us tried to act casual as we strolled by the restaurant. Then we realized that Liza was now standing directly in front of us on the sidewalk smoking a cigarette. Oh my God, “Vin with a Z” was taking “Anna with a Z” to meet “Liza with a Z”. We were totally Z’d to the max!

I lightly tapped Liza on her shoulder and introduced the three of us. She was very gracious and warm, acting more like an old friend than a celebrity. Insisting on taking a few pictures with us, she hugged us all repeatedly and then signed an autograph for Mama. Liza kept talking and talking as if we had known her for years, just like you would expect her to do. She even joked with me, calling me "Daddy" since my name is Vincent just like her father, Vincente Minnelli, who also suffered with Alzheimer’s. 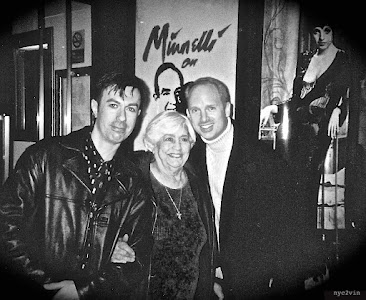 Liza made our day, but even more importantly she made Mama's day. It was a most memorable meeting, especially for Mama. She loved Liza and went to many of her shows with us. She always kept the photo of the four of us by her bedside in the nursing home. Mama never forgot that day and would proudly tell people about the time she met Liza Minnelli. When we ran into Liza a few years later, I told her about that day and how much it meant to Mama. She was very touched and said “Oh baby, I’m so glad."

I’ll be eternally grateful to Liza for being so giving to the three of us on the street that day and leaving Mama with a lasting memory. Mama met Minnelli and it meant the world to her. She would tell the story again and again and again. To quote a song from Vincente Minnelli’s MGM film “Gigi”... “Ah yes, I remember it well.” And so did Mama!