Anniversary Of Our Book - What A Year

It's the one year anniversary that our book "Dementia-Mama-Drama" was published! The past year was a stressful and isolating one that we all will never forget. Most of us learned a lot about ourselves and we discovered new things that we did but thought we could never do. Zoom became a common ground for social get togethers and family became even more important. 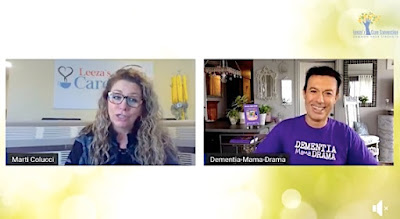 As for me, I'd rather focus on the positive things that happened for us. Since our book was published, "Dementia-Mama-Drama" was part of The Easton Book Festival. I was a guest author on Memory Cafe and was interviewed live on Leeza Gibbon's Leeza's Care Connection. I was also asked to be part of the AlzAuthors family along with being interviewed on the AlzAuthors Podcast! I was even on a panel with other caregivers for medical professionals discussing Alzheimer's and caregiving for the John Hopkins Alzheimer's Center. OMG, even more events are scheduled for later this year.

To celebrate all this, I thought it would be a great time to repost one of my first blog posts. We've come along way since then and I know that Mama would've been so excited that her story was being shared with a new audience.

On one of my daily visits I asked Mama what she knew about Alzheimer's or Dementia. She said it was a disease and that she gets sick just thinking about it. She didn't really want to talk about it. Her response was "I like what I am and that's it". Once again she changed the subject and broke out singing another version of "Some of These Days". Here's the video from our visit.

I usually didn't put Mama on the spot about the subject, but I just wanted to hear her feelings about it at this particular moment in time. Some days that's just how we dealt with it.
*   *   *