Back at The Palace Theatre on Broadway - Memories of Mama

We recently went to see "An American in Paris" at The Palace Theatre on Broadway. It was one of Mama's favorite MGM musicals. She loved Gene Kelly (who didn't) and Leslie Caron in one of Vincente Minnelli's most lavish creations. She loved Minnelli so much she'd tell me I was named after him. I always thought I was named after my grandfather, but then again that was Mama's story.


The last time the three of us went to The Palace Theatre was to see "Minnelli on Minnelli". It was Liza Minnelli's loving tribute to her father's films. It was also Mama's last Broadway show... and you know she loved her Liza! I was feeling very nostalgic during "An American in Paris" on stage remembering us watching the movie over and over on the late late show marathon. Mama and I loved our musicals!

I knew that if she was with us at the show she'd be in heaven. At the end of her favorite songs, she would've been yelling "One more time" just like she did at Liza's show. That's the way Mama rolled. She loved her music, and that's when she came alive.

During the curtain call at "An American in Paris" I stood with the rest of the audience as I yelled out "One more time" just like Mama. Oh my God, I guess we're a lot alike.


Having Your Daily Dose of MAMA DRAMA?
Caregiver or Advocate?
Show you care and spread the word with
Dementia-Mama-Drama products

Mama aka "Anna with a Z" was diagnosed with Dementia and onset Alzheimer's Disease. She was a native New Yorker displaced to California. Music was great therapy and would change her mood. Mama was quite a colorful character and always spoke her mind. You can view her many videos on Mama’s own YouTube channel Dementia-Mama-Drama.

Dementia-Mama-Drama is about the relationship of a modern family... a mother, her son and his partner. A Gay Couples daily dose of Dementia with “Mama Drama”. Today's family may look different but the feelings are the same. Their bittersweet bumpy ride with Mama and Alzheimer’s, dealing with it all through the power of love, music and humor.

Raising Dementia Awareness Around the World

Outstanding Work in Bringing Awareness to Alzheimer's and Caregiver Support 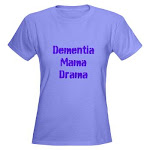